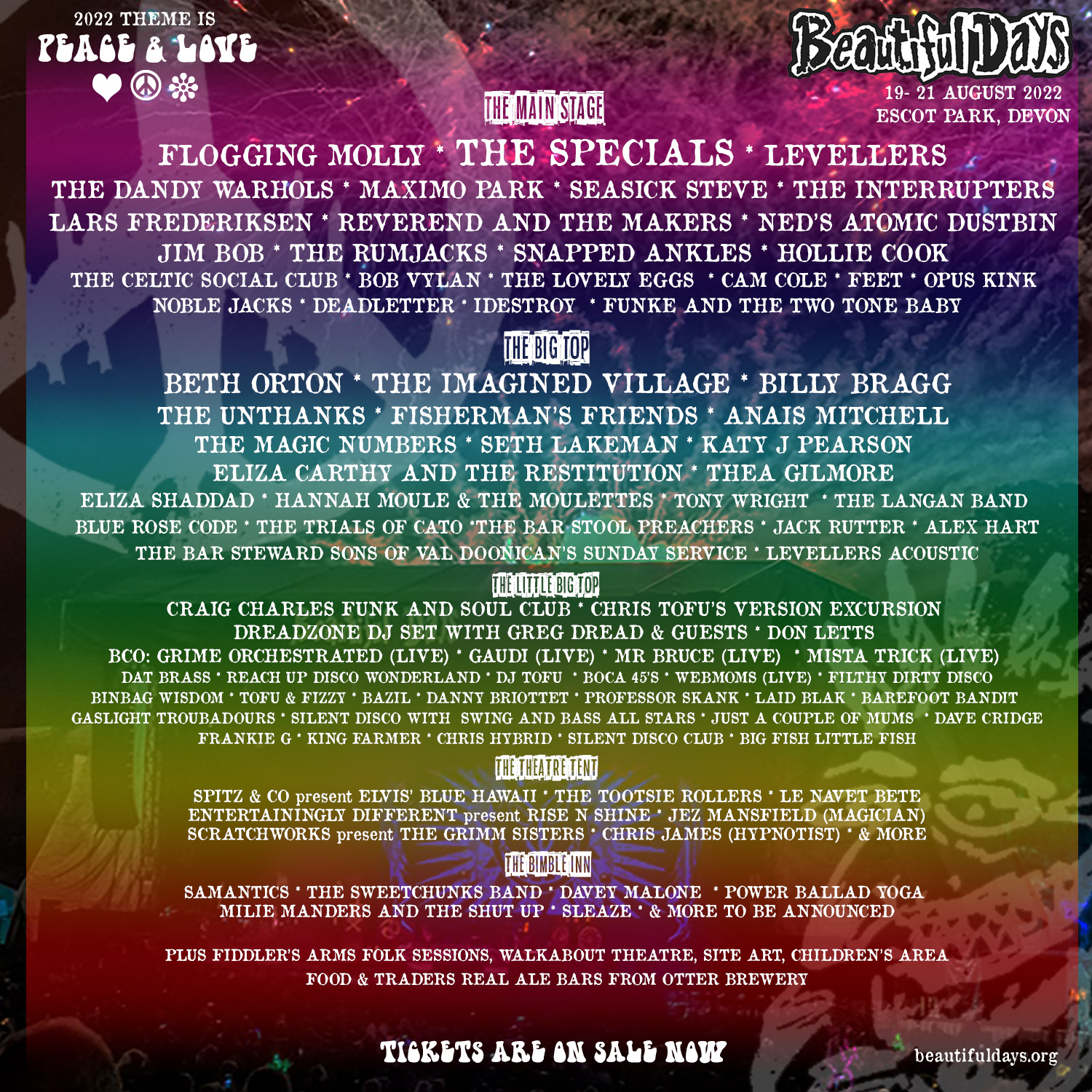 Flogging Molly return to the festival to headline Friday night on the Main Stage. It’s been over two decades since the Celtic punk rockers burst onto the scene with their classic debut album Swagger. Armed with a fistful of rousing songs that are timeless in sentiment, their live shows are nothing short of legendary. Saturday headliners are The Specials – one of the most influential and important bands of all time. Changing the face of UK music in the 80’s with hit singles including ’Too Much Too Young’ and ‘Ghost Town’ they were at the forefront of the 2 Tone movement infusing ska with punk and homegrown political anxiety with wider issues. Studio album Encore, their first new music for 37 years, was released in 2019 and went straight to number 1 in the UK Official Charts. Festival founders Levellers will headline the Main Stage on the Sunday night to close the weekend with a hit-rich set followed by the traditional firework spectacular. The band will also open the festival with an acoustic set in The Big Top.

Also announced for the Main Stage are alternative rock band The Dandy Warhols from Portland, Oregon whose 25 year career includes nine studio albums, two compilation albums and 27 singles including hits “Bohemian Like You” and ‘We Used To Be Friends’. Plus the brilliant Maximo Park play for the first time at Escot. From the very first song on their very first album, 2005’s A Certain Trigger – a multi-platinum selling, Mercury-nominated breakthrough in every sense – singer and lyricist Paul Smith pinned his socio-political colours to the mast. American blues guitarist and singer Seasick Steve who is known for his fantastically compelling live shows, plus two-tone-inspired, powerfully melodic, punk-fuelled LA band The Interrupters and Lars Frederiksen who is best known as a guitarist and vocalist for the punk band Rancid and has been a major player in the California punk scene since the 90’s. 2021 saw the release of Frederiksen’s debut solo project “To Victory”, Sheffield’s Reverend And The Makers fronted by Jon “The Reverend” McClure and favourites Ned’s Atomic Dustbin with their bass-heavy wall of noise are also on the bill.

BRIT Award winner, and two time Mercury Prize nominee Beth Orton headlines Friday night in The Big Top. Over the course of her six albums to date, Orton resolutely refutes categorisation, weaving from a hushed, folk-informed storytelling to dark, brooding esoteric experimentalism. Through all these different sonic explorations, Beth remains a fantastically evocative songwriter and one of the UK’s most unique and beguiling voices. Headlining Saturday night we have a very special performance from The Imagined Village who are reuniting with most members of the original line-up for just two major festival performances this Summer. The most ambitious folk fusion band of the 21st century, The Imagined Village set out to match English traditional songs against the sounds of contemporary multi-cultural England, with influences from Asia, the Caribbean and elsewhere. And they did so with an extraordinary line-up that included folk celebrities Eliza Carthy and Martin Carthy, Simon Emmerson (of Afro-Celt Sound System fame), sitar exponent Sheema Mujherjee, that rousing dhol and tabla percussionist Johnny Kalsi, and drummer Andy Gangadeen. Topping the bill on Sunday night is the UK’s foremost political singer-songwriter Billy Bragg. Orator, entertainer, rabble-rouser, negotiator, pamphleteer, the fabled ‘big-nosed bard from Barking’, Billy Bragg is many things. His new album ‘The Million Things That Never Happened’ was released in 2021.

Also announced for The Big Top are Mercury prize nominated The Unthanks featuring Tyneside sisters Rachel and Becky Unthank who, as well as preparing to release their brilliant new album Sorrows Away, recently found time to provide the soundtracks for Mackenzie Crook’s beautiful adaptations of Worzel Gummidge. The festival welcome back Cornwall’s finest export the singing group Fisherman’s Friends and also on the Big Top line-up is Anais Mitchell who is a songwriter of exceptional imagination who released her first solo work in a decade in January this year, UK four piece (two pairs of brothers and sisters) The Magic Numbers who are renowned for their unique harmonies, Westcountry multi-instrumentalist Seth Lakeman who recently released new album Make Your Mark, Bristol singer Katy J Pearson whose debut album ‘Return’ was one of the standout releases of 2020 and Eliza Carthy and The Restitution. Eliza Carthy MBE should by now need no introduction. A multi award-winning singer, songwriter and musician, she is one of the most recognisable faces of the English folk revival.