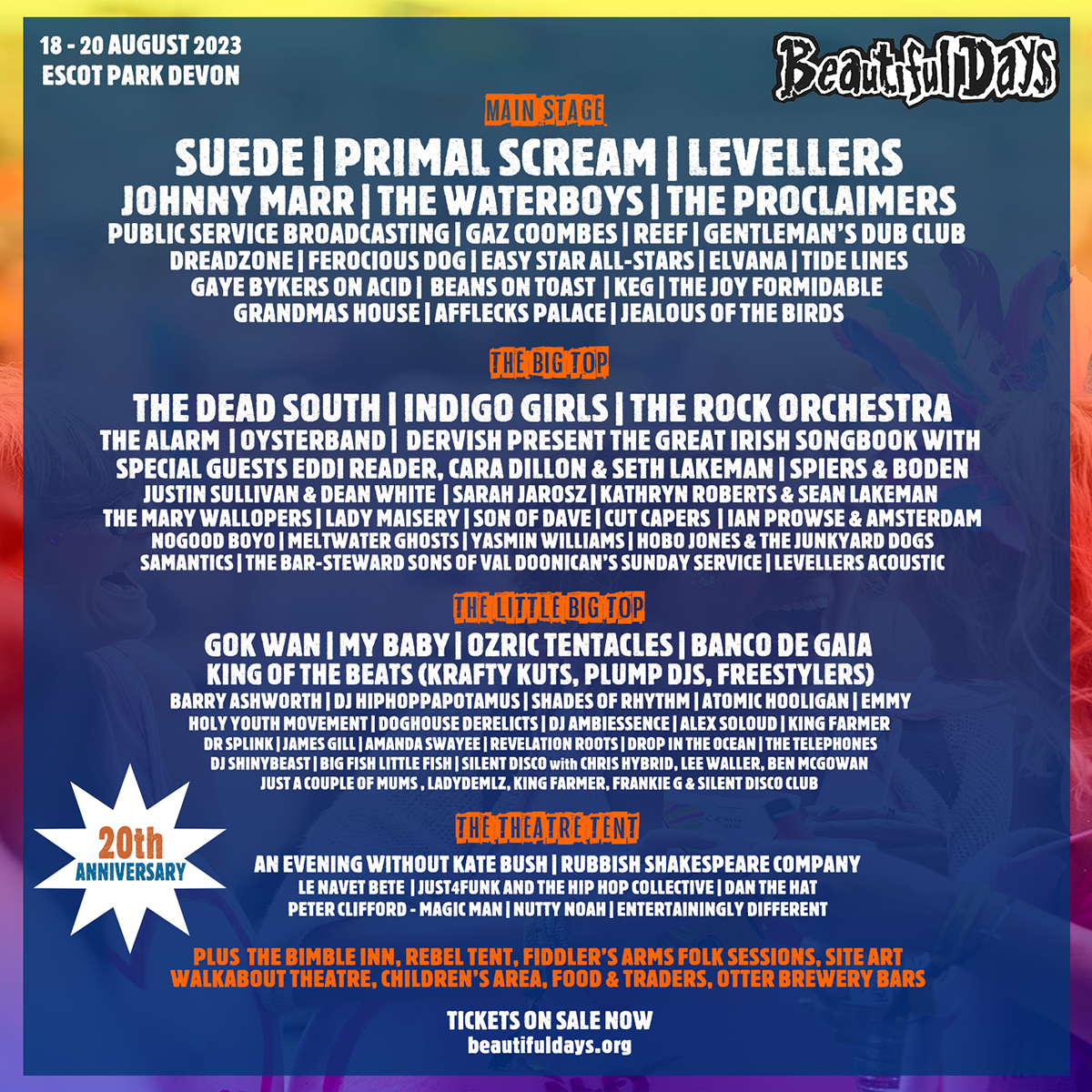 Headlining the Main Stage on Friday night are Suede. Fronted by vocalist/lyricist Brett Anderson, Suede kick-started the Brit-pop revolution of the 1990s. Since their eponymous debut in 1993, the band have had numerous hit singles including ‘Animal Nitrate’ and ‘Beautiful Ones’. The band released their newest album ‘Autofiction’ in September 2022. Heralded as “their best album in decades” the edgy, post-punk-inspired release debuted at number two in the UK charts. On Saturday the festival welcome back Primal Scream to top the bill on the Main Stage. Over the past three and a half decades Primal Scream have embraced everything from psychedelic pop to degenerate rock’n’roll; euphoric rave to industrial gloom. 1991’s genre-blending masterpiece ‘Screamadelica’ is a perfect amalgam of dance music, rock’n’roll and psychedelic expansion which captured the mood of the nation. It features hits ‘Come Together’, ‘Movin’ On Up’ and ‘Loaded’. Festival founders Levellers will headline the Main Stage on the Sunday night to close the weekend with a hit-rich set followed by the traditional firework spectacular. The band will also open the festival with an acoustic set in The Big Top. Their brand-new acoustic album ‘Together All The Way’, a follow up to their 2018 Top 20 album ‘We The Collective’, is out in March.

Also announced for the Main Stage is Johnny Marr. He started his career with The Smiths, beginning an amazing history as one of the most influential songwriters and guitarists in British independent music. Marr’s fourth solo album ‘Fever Dreams Pts 1-4’ was released in 2022. The new album reflects his multi-faceted past but takes his music somewhere startlingly new. Plus The Waterboys led by mercurial and brilliant Scottish guitarist/vocalist Mike Scott. Few bands have as great a live reputation as The Waterboys and they show no signs of fading. Twin brothers Craig and Charlie Reid aka The Proclaimers whose enduring appeal across generations sees them continue to enjoy huge success around the globe return to play the Main Stage. They recently released their 12th studio album ‘Dentures Out’. Public Service Broadcasting who are known for sampling old public information films and archive material and setting them to new music. Their fourth album and their most ambitious undertaking yet, Bright Magic, is out now. Former Supergrass frontman Gaz Coombes who is currently flying high having secured his first solo Top 10 with fourth studio album ‘Turn The Car Around’ in January this year – an album lauded as his best in 20 years.

Gentleman’s Dub Club have made a name for themselves as one of the most respected names in dub music and their energetic live show has made them festival favourites across the UK and Europe. Glastonbury rockers Reef return, since forming in 1993 they’ve had 9 UK Top 40 singles and 6 UK Top 40 albums as well as penning arguably one of the biggest rock songs of the 90’s with their Top 10 single ‘Place Your Hands’. Festival favourites Dreadzone are celebrating their 30th anniversary in 2023 with a new studio album coming soon. Increasingly popular Celtic-folk infused punk-rock band Ferocious Dog who latest album ‘Hope’ peaked at Number 11 in the UK album charts. Easy Star All Stars who have just announced their newest album, a re-imagined rendition of David Bowie’s classic ‘The Rise and Fall of Ziggy Stardust and The Spiders from Mars’, aptly entitled ‘Ziggy Stardub’ out in April, psychedelic rock band Gaye Bykers On Acid and Rock & Roll meets Grunge as Elvis fronts Nirvana in the form of Elvana.

Headlining The Big Top stage on Friday at the festival are Canadian bluegrass quartet The Dead South who enjoy a global following sparked by YouTube, early success in German rock clubs and now sold out shows at iconic venues across continents. The Rock Orchestra will top the bill on Saturday night, they are a chamber orchestra who breath beautifully dark energy into legendary rock & metal tracks from the last 40 years. Skeleton players effortlessly switch between sublime melodies & powerful walls of sound. Sunday headliners are American folk-rock duo Indigo Girls – the multi-Grammy-winning Emily Saliers and Amy Ray. Committed and uncompromising activists, Indigo Girls are one of the most successful folk duos in history who have sold over 15 million records.

Also announced for The Big Top are Legendary Welsh band, The Alarm fronted by Mike Peters who are currently celebrating their 40th Anniversary. The five-time BBC Radio 2 Folk Award winners and British folk-rock legends Oysterband return to Beautiful Days having played a few times over the year including at the very first festival in 2003! One of Ireland’s best-loved traditional bands, Dervish, lead a very special performance of The Great Irish Songbook joined by guests Eddi Reader, Cara Dillon & Seth Lakeman. The festival also welcome the return of Spiers & Boden one of the best loved duos on the English folk scene and beyond. They also founded and fronted the pioneering and hugely successful folk big band Bellowhead.

New Model Army singer-songwriter Justin Sullivan is joined by fellow bandmate Dean White to perform songs from his solo and band back catalogue. Grammy Award-winner and ten-time nominee by the age of 31 – the captivating Sarah Jarosz. Husband and wife duo Kathryn Roberts & Sean Lakeman whose partnership for over a quarter of a century has proved personal, permanent and pivotal. Their new album ‘Almost a Sunset’ is coming this Spring. The Mary Wallopers, originally conceived as a three-piece ballad group who travelled the length and breadth of Ireland singing & collecting songs, recently expanded to a seven piece and released their self-titled debut album in 2022. Plus Lady Maisery whose new album ‘Tender’ was released in November 2022 described as ‘The most exquisite vocal harmony work on the English folk scene’. Also renowned Canadian maverick Bluesman Son Of Dave, 9-piece hip hop and swing band Cut Capers, singer-songwriter Ian Prowse & Amsterdam, the UK debut of the cosmic country supergroup Meltwater Ghosts led by Rev Hammer and Welsh trash-Trad group Nogood Boyo.

Completing the bill on the The Big Top are guitarist for the new century Yasmin Williams. The melodic and percussive sounds that emerge, made by just one musician, are mind-boggling. The one-man machine that is Samantics makes a well-earned move up from smaller stages to a slot in the Big Top. Hobo Jones & The Junkyard Dogs return to celebrate their 20th anniversary in 2023 and Barnsley trio The Bar-Steward Sons Of Val Doonican will be joined by very special guests for their annual Sunday Service.

2023 SUNDAY THEME IS TO BE ANNOUNCED

THE BIMBLE INN
To be announced

THE REBEL TENT
To be announced