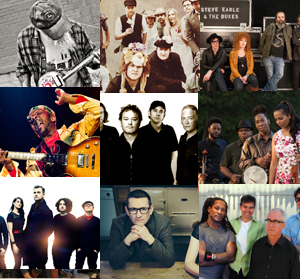 Grammy Award-winning American musician, actor, author and legend Steve Earle with his band the Dukes will headline Friday night at Beautiful Days. The left-wing songwriter and guitarist,  whose ‘outlaw’ status is legendary, has one of the most distinctive voices in American music. Veteran American bluesman Seasick Steve whose most recent album Hubcap Music featured guest appearances from Jack White and John Paul Jones will headline Saturday night and festival founders, Brighton folk-rock band Levellers, will close the 2014 event on the Sunday night.

Check out the line-up page to see the full list of acts announced so far for the Main Stage, Big Top and Little Big Top. The last remaining acts for the main stages will be announced over the coming months with full line-ups for The Bimble Inn, The Band Stand, The Theatre Tent AND the Sunday theme still to come!