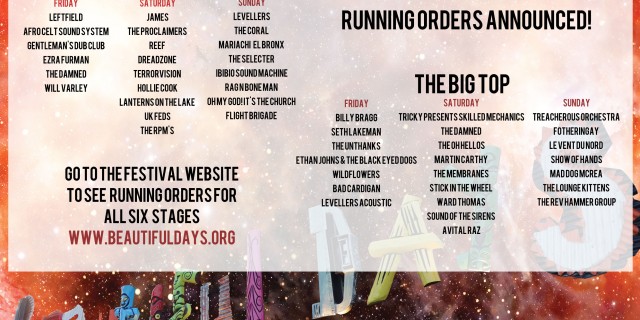 We’re delighted to be able to finally announce the running orders and last acts for Beautiful Days for all stages. Please go to the festival website to see them all on the FESTIVAL LINE-UP page

The line-up for The Bimble Inn has now been announced, they will be playing host to some fantastic up-and-coming acts, local artists and festival favourites. Their bill includes Asylums, The Eskies, Bill Baird, Xylaroo, Sadie Horler and Hobo Jones & The Junkyard Dogs.

There have been two late changes on the Main Stage and Big Top line-ups since we first announced them. Firstly, due to health reasons Sharon Jones & the Dap-Kings are not able to be at Beautiful Days this year after having to cancel a number of European shows and secondly, Baaba Maal has cancelled his performance.

We are delighted to add Ibibio Sound Machine to the Main Stage bill and headlining in The Big Top on Saturday night is now Tricky who presents Skilled Mechanics. Bristol-born producer and musician Tricky began his career as an early collaborator of Massive Attack before embarking on a solo career with his acclaimed debut album, Maxinquaye, in 1995.